Neodymium belongs to the Rare Earth family. It was first discovered as an oxide in 1885 by the Austrian chemist Carl Auer Von Wels Bach in a mineral called didymus, composed of neodymium and praseodymium. But it was only 40 years later in 1925 that metal neodymium was isolated.
The Japanese scientist Masato Sagawa is the inventor of the sintered permanent magnet NdFeB.
The sintered magnet NdFeB was first designed and developed by Sagawa during his time at the Fujitsu laboratories where he worked from 1972 to 1982. Without the support of his supervisor for the new magnetic compound, Sagawa resigned in 1981 and joined Sumitomo. Several months after its introduction in 1982, the most powerful NdFeB sintered magnet was developed. Sagawa presented his new discovery at the conference on magnetism and magnetic materials in November 1983 in Pittsburgh, USA. In 1988, Sagawa founded Intermetallics, a research and development company dedicated to the development of neodymium magnets. He also founded the NDFEB company in 2012 in Kyoto, which is currently developing a production treatment for the most powerful NdFeB permanent magnets used in sustainable energy.

The method of production is a combination of foundry and powder metallurgy.
During the pressing operation the powdered alloy has the particularity of igniting on contact with oxygen and all production phases are carried out in a neutral atmosphere until sintering. After sintering the material no longer ignites. However, it remains sensitive to oxygen or other aggressive gases. Free neodymium atoms oxidize; oxidation begins with the atoms on the surface and spreads to the grain joints, the material gradually loses cohesion and falls back to powder form.
For this reason, it is important not to interrupt the production line under neutral atmosphere and that at the end the magnets must be coated.

Regardless of the nuance used, the magnetic field required to achieve full saturation is in the order of 1600 kA/m (20kOe). In practice, an external field of 2400 kA/m (30kOe) is used to treat the most difficult cases.
As with SmCo magnets, the use of high-energy discharge benches is systematic. On the other hand, the higher resistivity of the material (150µΩcm) and the moderate value of the magnetization field help to simplify magnetization problems.

Due to their very high intrinsic coercive field, NdFeB magnets can be magnetized before assembly in the final magnetic circuit without loss of performance. However, magnetization after assembly is easier to achieve than with SmCo magnets.
Shaping by compression and sintering requires simple prismatic shapes. The required compression rates are high so that we are often limited to small parts. (a few mm to a few ten cm). For larger magnets, assemblies are required. The forming is done in tools under intense magnetic field either directly to dimensions for very large series, or in blanks in which the final dimensions will be cut.
Sintering at 1300°C and machining with grinding wheels or diamond wires.
The high specific magnetic energy of NdFeB magnets allows a massive reduction in the size of the magnetic circuits.

The NdFeB magnet is sensitive to corrosion in a humid atmosphere which can produce a more or less rapid disintegration of the material. The magnet must be surface treated to protect it.
Different types of coatings are available depending on the actual use and constraints of the application and for integration into the complete magnetic system.

Examples: paint, phosphate, zinc, nickel, epoxy, double-nickel, dichromated olive green zinc plating at 25µ which is the optimum coating. The most commonly used is the double nickel (NiCuNi) coating.
The quality and regularity of the layer thickness depends on the prior preparation (tribofinishing) because the angles must be rounded in order to avoid the accumulation of loads due to peak effects. This has the effect of modifying the geometry of the part and its tolerances.
Recent progress in the development of alloys has led to a significant improvement in corrosion resistance. This often means that no specific protective coating is required.

NdFeB magnets can store twenty times more magnetic energy than the Alnico magnet. It is then used wherever strong permanent magnetic fields are required, but with a low volume available. They are used, for example, in engines, generators, speakers and hard disks. 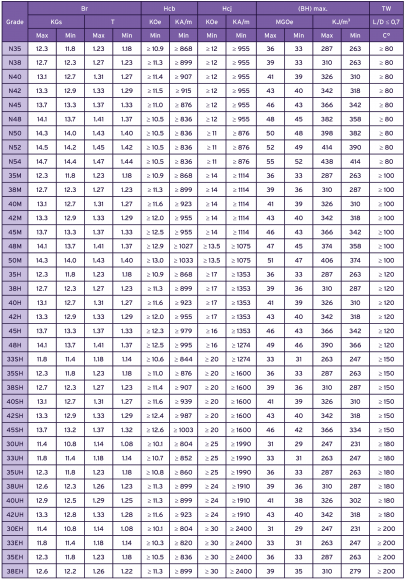